Coffee is loved by people worldwide. After water, it’s the second most consumed beverage on the planet! Europeans are currently dominating the coffee culture, with Finland leading the way (the average Finn drinks an average of 2.64 cups a day). Where does this obsession with everything java come from? Aside from the taste and pleasure people get out of a morning cup of coffee, according to scientists, it could be because they lack a gene called PDSS2.

Researchers from the University of Edinburgh and the University of Trieste studied the DNA of 1,700 from the Netherlands and 1,200 people from Italy and discovered that those who had the gene PDSS2 metabolized caffeine slower than those who don’t have it. As a result they tended to drink less coffee, most likely because they simply didn’t need as much of it.

For the individuals that metabolize caffeine faster and need to make frequent trips to the coffee machine, it’s wise to limit your intake to 4 cups a day. Consuming more than 400 mg of caffeine in a 24-hour span can lead to insomnia, restlessness and even tachycardia. But don’t worry, there are plenty of other drinks that make great substitutes: tea, hot chocolate, and chicory. The latter is a particularly excellent option, as it’s very similar to coffee, but has the added benefit of being caffeine-free.

Coffee beans contain small amounts of vitamins, minerals and antioxidants, which means coffee is actually good for you in moderation. A great way to lower your intake is by switching a cup of coffee with morning yoga once in a while – it’s a great way to wake up ! 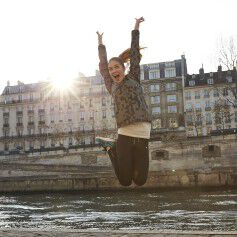